You are here: Home / News / Protests against APEC summit in Manila 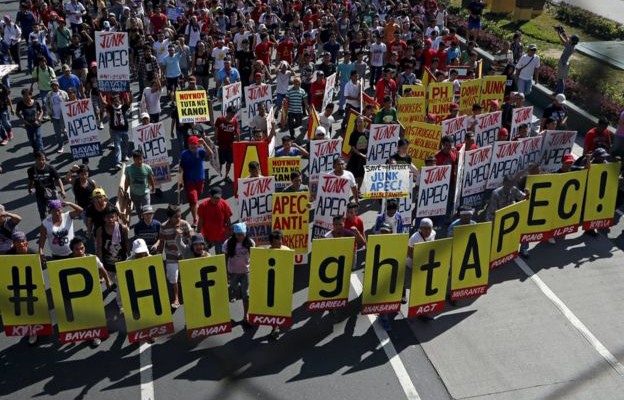 Hundreds of people from different walks of life took to the streets of the Philippine capital to demonstrate against the ongoing Apec regional trade summit.

The security forces fired water cannon to disperse the protestors from disrupting the annual Asia-Pacific Economic Cooperation (APEC) leaders’ meeting in Manila. Human rights and pro-labour groups joined the rally, saying Apec works to benefit only multinationals and rich countries at the expense of developing economies.

The demonstrators chanted slogans such as “We will struggle” and “Junk APEC” while anti-riot police pushed the crowd back. The participants of the rally carried big placards under the hot sun while chanting anti-Apec, anti-US slogans such as “down with Apec, down with America.”

The Philippine National Police Spokesperson Wilben Mayor appealed to the protestors to halt the demonstrations as it is destroying the image of the country across the globe. At least one policeman was injured while trying to overcome the trouble makers.

Members of a left wing activist group the Bagong Alyansang Makabayan clashed with the security forces, who kept the demonstrators away from the Philippine International Convention Center, the site of the two day summit.

“These demonstrations will not stop, even if it means we have to go headt-to-head against the entire police force and we have to break through all the barriers,” said Charisse Bernadine Banez, spokeswoman of the League of Filipino Students.

The annual meeting of 21-member states was focused to boost trade and growth across a region of about three billion people. APEC leaders demanded for increased international cooperation in the fight against terrorism as they met on the last day of the meeting.

US president Barack Obama, Chinese Head of State Xi Jinping and Japanese Prime Minister Shinzo Abe were among the attendees of this year’s conference. IMAGE/Reuters