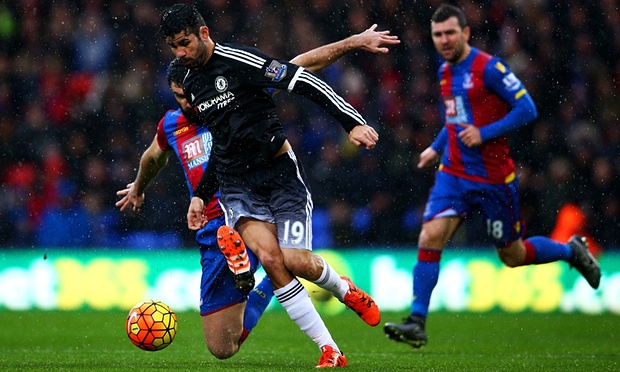 Diego Costa set up the first and scored the third as the Blues defeated Crystal Palace 3-0 at Selhurst Park on Sunday.

Oscar, Willian and Diego Costa registered goals in a London derby to earn three vitals points for the visitors. With this result, Chelsea are now six points clear of the relegation zone. On the contrary, Alan Pardew’s men remain seventh in the table, eight points better off than Chelsea.

Oscar dos Santos opened the scoring from six yards in the 29th minute when Costa broke clear of the Palace defense and set up the Brazilian winger. Chelsea took complete control of the game and dominated the possession particularly after Oscar’s strike. Willian made it 2-0 at an hour mark when he fired a powerful strike into the top corner after neat build-up involving Oscar and Cesc Fabregas.

Diego Costa once again got in on the act, scoring the third goal of the afternoon just six minutes after Willian’s goal. The only worry for Chelsea head coach Hiddink was the groin injury picked up by Eden Hazard, who limped off the pitch after 15 minutes. This was Chelsea’s second away triumph in the Premier League this season, moving up to the 14th place.

The home side went into the contest without the injured Yannick Bolaise and suspended Yohan Canaye. Hiddink made two changes from the goalless draw at Old Trafford, bringing back Fabregas and Costa with Matic and Pedro dropping to the bench.

The Eagles winger Wilfried Zaha wasted the best opportunity to put the ball past Thibaut Courtois. The defeat marks third successive game without a goal for Crystal Palace and Pardew will be looking for better performance when they travel to Villa Park on 12th of January. IMAGE/Getty Images