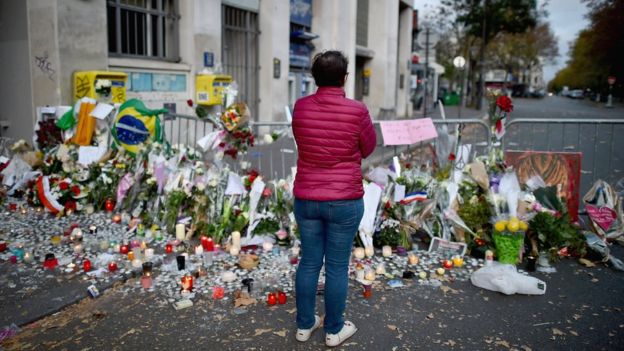 Paris attacks update – French police have arrested a number of suspects and discovered weapons in a car abandoned in Paris suburb.

The residents of Paris gathered to mourn on the second day of the deadly Paris attacks. The Parisians lit candles and laid flowers at the locations of the attacks across the city while others observed a minute of silence for the victims at their workplaces.

Friday’s massacre led to a large search operation across the country in search of the attackers’ accomplices. After stepping up the hunt for information nationwide, the local authorities found several AK47 assault rifles in the back of an abandoned black SEAT vehicle in Montreuil, an eastern suburb of Paris.

According to the witnesses, the car found in Montreuil is believed to have been used by gunmen who opened fire in restaurants on Friday. The abandoned car with a Belgian plate number was rented in neighboring European state of Belgium. After this discovery, French authorities have been working closely with the Belgian intelligence to capture the criminals involved in Paris carnage.

In Belgium, police have arrested seven people over their alleged links to the attacks but the investigators are yet to establish their involvement in Islamic State claimed Paris attacks, which killed 129 people of 15 different nationalities and more than 300 were wounded.

French police have identified Omar Ismail Mostefai, a French citizen, as one of the attackers. The 29-year-old Paris native had been known to the security forces for his alleged links to armed groups but had not been previously involved in violent activities. Police have taken Mostefai’s six relatives into custody for investigation.

A Syrian passport was also found at the crime scene, creating chaos and panic among the refugees in the European Union. Greek authorities have confirmed that a man who died in the attacks with a Syrian passport next to him had registered as a refugee on the island of Leros in October.

The investigators believe that the series of coordinated attacks were planned abroad by the Islamic State jihadist group, but have not yet confirmed the identities of others involved. IMAGE/Getty Images