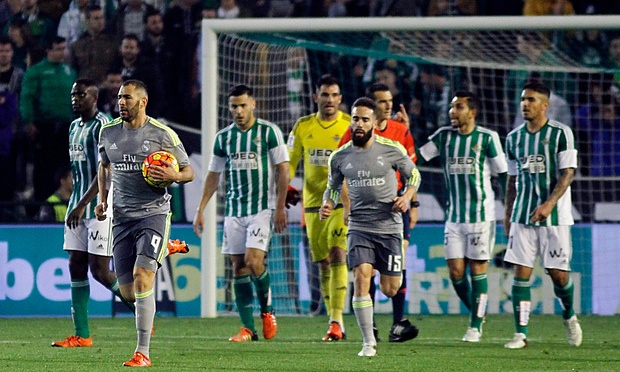 Karim Benzema secured a point for Real Madrid as the Frenchman staged a comeback in a thrilling game at Real Betis on Sunday.

The newly appointed manager Zinedine Zidane insisted Real Madrid still have a chance of winning La Liga even after drawing 1-1 at Benito Villamarin. The French football legend Zidane suffered his first setback since succeeding Rafael Benitez in the dugout. Zidane guided Real Madrid to 5-0 and 5-1 victories over Deportivo and Sporting Gijon in his first games.

Real Madrid were unable to close the gap at the Primera Division Summit. They are placed third, sitting four points behind the leaders Barcelona with a game in hand. Zidane’s men failed to capitalize on Atletico Madrid’s goalless draw with Sevilla earlier in the day.

The hosts took a shocking lead after seven minutes when Alvaro Cejudo unleashed a brilliant volley into the top corner from the edge of the box. Real Betis executed their game plan perfectly and did not give Madrid a sniff at goal. Madrid’s first opportunity came at 32nd minute when Ronaldo found a way into the box.

However the Portugal captain fired his left-footed shot well wide of the far post after a tidy exchange with Karim Benzema. The visitors claimed to have a penalty when Petros clumsily brought down Karim Benzema to the floor. Despite of calls from Madrid players, referee Juan Martinez was unmoved and the play was waved on.

The away side had a better start to the second half as they created a number of goal scoring opportunities in quick succession. Rodriguez failed to deflect Ronaldo’s cross while Karim Benzema blasted the rebound over the crossbar. Dani Carvajal, who replaced Danilo, thumped the ball wide of the near post after controlling a brilliant cross from Marcelo on the right.

Finally Real Madrid earned the much need equalizer in the 71st minute when Karim Benzema sweetly touched the ball into the empty net. The away side dominated the final stages of the encounter particularly after Benzema’s goal. Madrid kept on coming but the winning goal they craved remained elusive. IMAGE/ Paco Puentes/ EPA