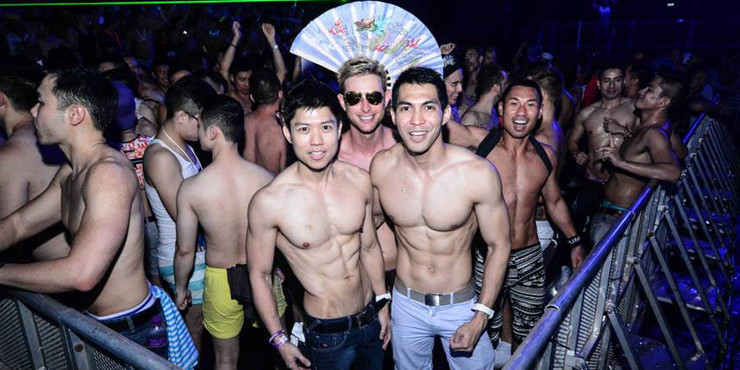 Gay Bangkok Scene: The focus of this article is on the non-commercial gay pubs and dance clubs in Bangkok, Thailand. Having lived there for 15 years and frequented these gay venues on numerous occasions, hopefully I can offer some helpful tips for those not-so-familiar with the gay Bangkok scene.

Gay pubs in Thailand are restaurants/bars where Thais go for drinks and snacks, usually just before going out to the dance clubs. The most popular ones in the tourist areas of Bangkok are Telephone Pub and Balcony, which are opposite one another on Silom Soi 4. The BTS Skytrain station Saladaeng is here, as well as the MRT Silom stop.

Both of these pubs have a large selection of food and drinks. I personally prefer Telephone’s food and menu, but the staff at Balcony is cuter. If you want to eat, I’d recommend eating at Telephone and then moving over to Balcony for drinks.

Both places have inside and outside tables, with many of the staff standing around outside. Balcony’s staff tends to be a bit younger and Telephone’s more masculine. Balcony has some cute bartenders also. Telephone has upstairs restaurant seating.

Both venues are busiest on Friday and Saturday nights during the hours leading up 11:30 or so when most patrons begin making their way to the nearby dance clubs.

The most popular gay dance clubs are on Silom Soi 2, most notably DJ Station. There are a few others on the same small soi that attract a mostly Asian clientele.

At the front of the soi you can check-in your baggage, and then some security personnel is there to check the I.D. of Thais to make sure they are the legal drinking age of 20. I’ve never seen them check the I.D. of foreigners, and certainly not Westerners.

Admission price at DJ Station is 200 baht, which includes two drinks. The bars are well-stocked with just about anything you’d want. If there’s a crowd at the first floor bar, head upstairs for quicker service. The outside stairs behind the admission booth leads to this area.

People start showing up at DJ around 11:30 p.m., but then at midnight the music stops and they have a show which lasts about 30 minutes. These type shows are very popular with Asian customers, not as much with most Westerners. They almost always include an intentionally ugly (and often overweight) transvestite as a clown act which Thais find hysterically funny.

When the show ends around midnight the music starts up again and the place really gets to pumping. Muscular Asians, often Chinese from Singapore, like to jump up on the various raised areas to dance and show off their hot bodies. There’s quite a bit of room to dance on the main stage if you’re drunk or brave enough.

DJ is very crowded on the weekends (even perhaps too crowded), but less so during the week. Sundays and Thursdays are good nights to go, but there’s a good crowd on any night.

This can be a delicate situation because it could be offensive to a regular Thai to ask if he’s a money boy. On the other hand, you could easily hook up with a freelancer who wouldn’t mention a word about money until after you got him home and had your sexual encounter with him.

Also, some freelancers would ask/expect money from certain people but not others. And though you can often tell freelancers by their dress or the way they act, in DJ these lines are definitely blurred.

A few hints that might help: Money boys tend to be a bit jaded from being around foreigners so much. They also tend to look like fully dressed go-go boys. If you haven’t been to the go-go bars, it might be useful to go to nearby soi Twilight off Suriwong just before the bars open to check out their looks and dress as they arrive for work.

The more innocent or genuine a Thai seems, the less likely he’s a money boy. And the greater the age difference between you and the boy, the more likely he is expecting money for sex.

It’s often helpful to ask the boy where he works or if he’s going to school. If he does either, that’s good news for you.

But none of these rules are by any means set in stone, and there’s always plenty of exceptions and surprises. You could even meet students who are expecting money for their services.

The third floor area at DJ tends to be a little less crowded. There are smoking rooms on the second and third floors, which can be good places to cruise and meet someone.

DJ Station closes around 3 a.m., and the late-nighters head down to G.O.D. on Silom Soi 2/1 (between sois 2 and 4). Here the crowd is drunker and more shirts come off, which means the scenery is even easier on the eyes than DJ Station. It stays open until sunrise.