You are here: Home / News / Dozens starved to death in besieged Syrian town of Madaya 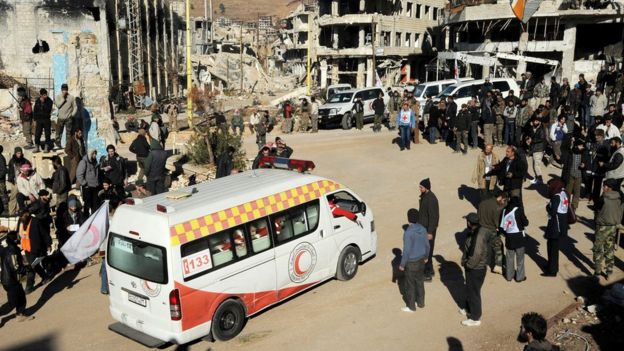 About two dozen people have starved to death whilst more are suffering from malnutrition in Madaya, town of Syria which has been under siege for six months.

The whole world witnessed the unceasing arm conflict in Syria where mortality toll rate plunge everyday. Syrian residents in Madaya, a town near the border with Lebanon, are facing a new challenge to survive as they stayed stuck and trapped in their homes to hunger and starvation.

Millions of civilians fled their homes and took refuge in the neighboring countries such as Lebanon, Jordan and Turkey. In addition, thousands have made perilous journey to cross the Mediterranean by riding dinghies and ferries in search of peace and new beginning.

“A lot of people are surviving on water and salt only,” said an activist in Madaya. “They dissolve salt into the water just to kill the hunger pangs they dying from. Undernourishment is killing people.”

The food available within Madaya has become cripplingly expensive and prices continue to rise. One kilogram of rice cost about $200 and 900 gram of formula for babies selling for as much as $300. The Syrians trapped in the villages have been forced to eat grass and undergo surgery without anesthesia. Some are even going after cats and dogs, to catch them and eat them.

The medical and humanitarian supplies were delivered by aid lorries last October. Madaya, located north-west of Damascus, has been besieged since July by a combination of Syrian forces loyal to President Bashar al-Assad and his ally, the Lebanon’s Shia Islamist Hezbollah.

In December, at least 22 people died from starvation including six babies. Most often mothers are malnourished to a point that they cannot produce enough breast milk to feed their newborns. Moreover, four civilians lost their lives due to landmine explosions while several others were killed by sniper fire. IMAGE/AP