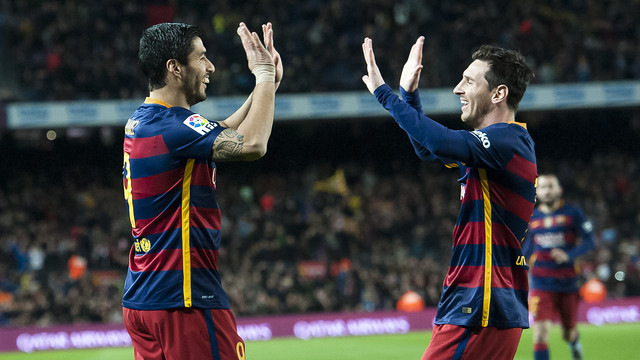 Luis Suarez led the rout against Gary Neville’s Valencia as he scored four goals in the first-leg of Copa del Rey semi-final at the Camp Nou.

Valencia came into the game with five-game unbeaten run in the competition. But they were forced on the back foot as Suarez struck twice in the opening 12 minutes of the encounter. On other hand, Barca made their ninth Copa del Rey semi-final appearance in 10 years.

Suarez broke the dead lock after just seven minutes to put the hosts ahead. Neymar stole the ball from Andre Gomes before playing in the Uruguay international to score his 32nd goal of the season. Five minutes later, Suarez made it 2-0 when he took a pass from Aleix Vidal and blasted past goalkeeper Ryan from just beyond the penalty spot.

The hosts were at their best and they produced another stunner in the 29th minute. Messi got in on the act when he netted off a sparkling back-heel pass from Neymar, his second assist of the night. Five-time Ballon d’Or winner could have extended the lead in the 45th minute when he hit the crossbar.

The visitors suffered a major setback just before the interval when Shkodran Mustafi was sent off. He was shown a red card for hauling down the Argentina international in the penalty area. Neymar stepped up to the spot kick but his attempt rebounded off the post. The home side was in complete control of the game with 3-0 up at the half-time.

After the interval, Gary Neville’s men posed no threat against the La Liga leaders as they were down to ten men. The home fans were back on their feet when the Argentina forward grabbed his second before an hour mark. After seven minutes, Valencia pulled a goal back but Rodrigo’s effort was ruled out for offside.

Rosario-native completed his third Copa del Rey treble as he capitalized on poor defending in the 74th minute. The hosts continued scoring and they made it 6-0 as Suarez clinched a hat-trick with a header from tight angle with seven minutes remaining. The former Liverpool striker netted his fourth of the evening in the dying moments of the match.

The colossal victory assured the defending champions second successive berth in the Copa del Rey final. The next week’s second-leg at the Mestalla is just a formality for the Catalan club as they are on the verge of becoming back-to-back Copa winners since 1998. IMAGE/FCB