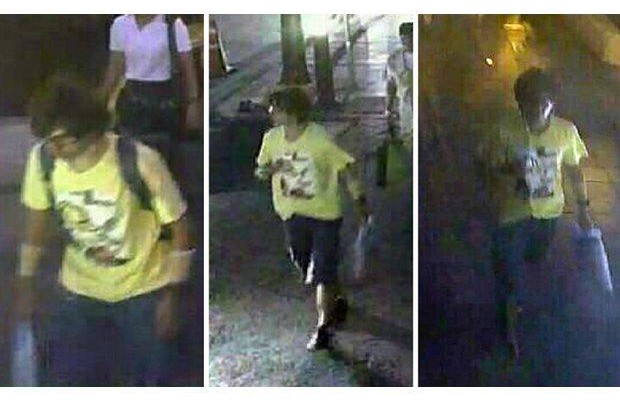 Bangkok bombing suspect has been detained in the Malaysian capital Kuala Lumpur and Thai police chief has left for Malaysia to verify the suspected bomber.

According to a source, Pol Gen Chakthip is likely to meet the Malaysian police to follow up on an arrest of the alleged Yellow-shirt Erawan Shrine bomber. Thai Police chief is expected to negotiate with Malaysian authorities to bring the detained individual back to Thailand to stand trial, if he thinks he might be the suspect.

Earlier on Saturday night, Malaysian police raided numerous rental apartments in Kuala Lumpur and apprehended Bangkok bombing suspect, who looks like the yellow-shirted bomber. Malaysian officials have asked their Thai counterparts to confirm if the man detained in Malaysia is the suspected bomber.

Thus, Thai police officers showed pictures of Saturday’s arrested bomber to detained suspects Yusufu Mieraili and Bilal Turk. However, the suspects said they did not know the man detained in Malaysia in connection with Bangkok blast.

After two days of intense questioning, the new suspect allegedly confessed to Malaysian police he was the Erawan bomber, who was caught on security cameras wearing a yellow shirt while carrying a black backpack to the incident site on 17th of August. He dropped off the backpack there minutes before the explosion went off.

Last week, Malaysia arrested two local citizens and a Pakistani national in connection with the investigation into central Bangkok bomb blast, which killed 20 people including 14 foreign tourists. Malaysian and Thai police have been working together to solve the puzzle since the attack.

Earlier this month, the investigators discovered that the suspected bomber might have crossed Kingdom’s southern border into Malaysia. Thai police have been heavily criticized over the investigation as they have failed to get to the bomber or the mastermind behind the deadly attack on the tourists. Image courtesy of Royal Thai Police.

If human specie can't pass the type 0 civilization: The End Of Human Civilization. The craft of … END_OF_DOCUMENT_TOKEN_TO_BE_REPLACED