You are here: Home / Entertainment / Justin Bieber caught naked while in private vacation 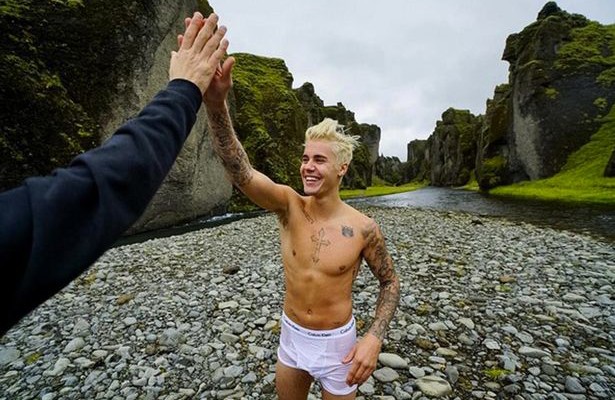 While the 21 year-old Canadian singer and songwriter Justin Bieber having fun with rumored model girlfriend Jayde Pierce, 20, in a private Bora Bora vacay, pictured naked. Recently, New York Daily News published censored photos of him while taking a dip in his private pool. Bieber felt angry as his naked photos went viral online, as he is a total victim of a privacy invasion. His nude pics received criticism, however, his fans extend their support.

Justin Bieber has been always an online topic and a center of media attention. A heart-throb to young teenage girls with his teen-pop music. He has been criticized and one of the target of Internet bloggers as his showbiz life been public. In 2010, Bieber was named the top trending star on Twitter because his fans frequently discussed him on the network. As a young singer and public figure, followed by thousands of fans and bashers, Bieber is expected to trend online especially with his naked photos.

With his previous post, showing his butt, Justin Bieber wrote: “Hey I deleted the photo of my butt on Instagram not because I thought it was bad but someone close to me’s daughter follows me and she was embarrassed that she saw my butt and I totally wasn’t thinking in that aspect. And I felt awful that she felt bad. To anyone I may have offended I’m so sorry. It was completely pure hearted as a joke but didn’t take in account there are littles (little kids) following me!!!”

In his latest nude photo, Bieber spotted in his private vacation with model Jayde Pierce who was wrapped up in a fluffy white robe. They were both unaware that someone is taking a photo which later began spreading online. Bieber’s legal team states publication of the nude photos represents a violation of the singer’s publicity and privacy rights. To protect singer’s public image, his representatives are threatening to sue if the photos aren’t taken down. In the letter, “We recently became informed that your company has obtained and is distributing unauthorized photographs of our Client including images showing him without clothing.”

His rumored love interest, Jayde Pierce claimed to be just friend with Justin Bieber. She stated, “He doesn’t let his fame get in the way of doing things. We weren’t stuck at home. People think Justin must be a brat and arrogant but he’s nothing like that.” She also shared how she and Bieber first communicate. “I saw there was a tick by his name showing it’s an official account. I thought, ‘S-t, Justin Bieber just messaged me.’ I have no idea how he came to look at my page. They started to exchanging messages via social media, later Justin Bieber asked her for her number. They then began to text each other. IMAGE/Instagram/@justinbieber