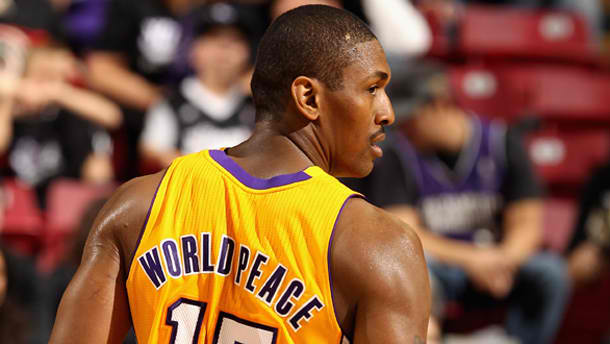 Known as Ron Artest before legally changing his name in September of 2011, World Peace previously played four seasons with the Lakers from 2009-2013, winning an NBA championship with the team at the end of the 2010 season.

Now 35, World Peace has been out of the NBA for one year after last playing for the New York Knicks in 2013-14.

According to Yahoo! Sports, the Lakers and World Peace agreed to a one-year, nonguaranteed deal, which will give World Peace the opportunity to be with the Lakers at least through their training camp which begins next week in Hawaii.

World Peace will be the 19th player on the Lakers’ current roster. The NBA regular season maximum is 15, but teams can carry up to 20 players during training camp.

According to reports, World Peace has often been present at the Lakers’ practice facility during this offseason.

During his previous four seasons with the Lakers, World Peace averaged 9.9 points and 4.0 rebounds per game. He is perhaps best remembered for playing a big role in the Lakers’ late-game rally and victory over the Boston Celtics in the 2010 NBA Finals.

The Lakers are one of the most successful franchises in NBA history, having won 16 league championships, with the first five of those coming during the 1940s and 1950s when the team was located in Minneapolis. Only the Boston Celtics have won more NBA titles with 17.

The Lakers, however, have struggled mightily the past two seasons, finishing second-to-last in the Western Conference last year with a 21-61 record.