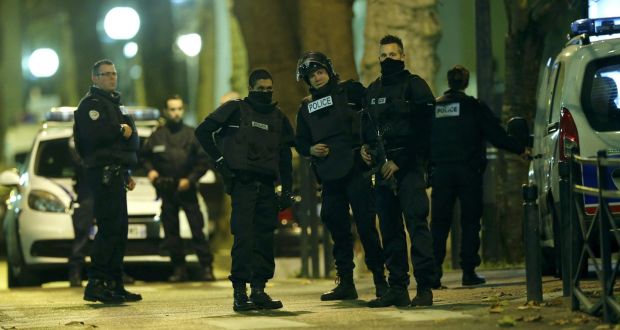 Two suspects linked to Paris attacks have died after police raided an apartment in Saint-Denis, a northern suburb of the French capital.

On Wednesday morning, the residents of Saint-Denis woke up to the sounds of gunfire and explosions as the national police raided homes searching for suspects. Two suspects were killed in the raid including a woman, who blew herself up, and other suspect was shot dead while seven people have been arrested for questioning.

The police operation in Saint-Denis, where the National Stadium is located, began at 4:20 local time. Prosecutor Francois Molins said a young woman detonated her explosive vest soon after the raid began and a man was killed by police sniper fire or a grenade, he added.

The local authorities are working on to establish the identities of the individuals killed during the raid on an apartment in the town. Three men were apprehended in the apartment. Two others were found hiding in rubble and a further two, including the man who gave shelter, were also detained, according to Pierre-Henry Brandet, Spokesman for the French interior ministry.

According to local media reports, five members of anti-terrorism unit were slightly injured while an assault dog, a seven-year-old Belgian Shepherd, was killed. The operation lasted for more than hour. There were grenades and non-stop assault rifle firing from both sides.

As the operation got under way, roads were blocked off by lorry-loads of soldiers and armed police. Local residents were urged to stay indoors during the early morning operation. Later, the locals reported hearing continuous gunshots and large explosions.

Since Friday, French police have been conducting an operation nationwide in search of alleged suspects behind the Paris attacks, which killed at least 129 people in six different sites across the French city.

Saint Denis, a multicultural and multi-religious banlieue, is a residential area where people from different backgrounds live together in peace and harmony. There are Africans, Indians, Chinese, Turkish and many other ethnic groups. IMAGE/Reuters