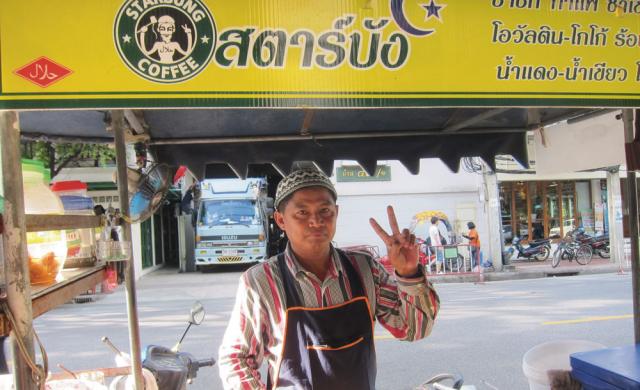 Bangkok — (UPDATE) A Bangkok coffee vendor has agreed to remove his logo as part of an out-of-court settlement with Starbucks, he said on Thursday.

“We met halfway in an out-of-court settlement,” said Damrong Maslee, the Bangkok push-cart coffee vendor whose “Starbung Coffee”  logo was a green and white Starbucks-like round sign with a Muslim man at its center and crescent moons on the side. The Starbucks logo features a mermaid in the center.

“They agreed to drop the demand for compensation, and I agreed to stop using a circular sign for my coffee shop logo,” Damrong told dpa.

He has changed the name of his coffee stall to “Bung’s Tears”, with a man in a Muslim cap crying, the Bangkok Post reported.

Damrong had claimed his former Starbucks-like logo was inspired by his Muslim religion.His recent legal battle with Starbucks brought him social media fame in Thailand, which has apparently been good for his business.

Popular Coffee in Thailand
Mai Thai Coffee is cultivated in the highlands of Northern Thailand. Ideal climate, altitude and soil conditions as well as a meticulous picking and processing system attribute to the rich but mellow taste of Mai Thai Coffee.

@coffee_la Thanks for the write up on our Bangkok Iced Coffee!! We have nitro cold brew at the shop also 😉

Villages across northern Thailand are being required by the Thai Government to restrict their land use. Primitive slash and burn cultivation methods used for centuries by the villagers are no longer permitted.

The Royal Forestry Department of Thailand looks favorably on coffee cultivation in the highlands as it eliminates erosion and helps restore the essential watersheds. Coffee cultivation is helping villagers to earn their livelihood on less land.