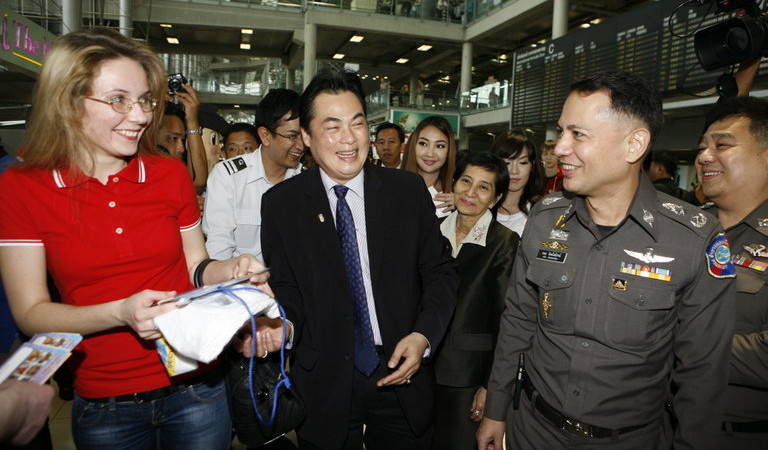 They believe the extra charge would lead to an increase in the quality of tourists to Thailand, said Mr. Pradit.

“The tourism and sports minister (Somsak Phurisrisak) told me that every other country is collecting entry fees from foreigners,” he said.

“The money will be used for many purposes by the tourism, health and foreign affairs ministries, and the Immigration Bureau.”

He said the new entry fee is expected to take effect January 1, but might be put off until mid-January because the high number of tourists entering the country at that time could lead to confusion, according to a Bangkok Post report.

When the media asked him if the plan could backfire and result in fewer tourists, Mr. Pradit said the tourism ministry did not oppose the plan.

“Now is the time for us to have quality tourists. It’s not as if inbound tour operators won’t organise tours for foreign tourists to come to the country because of the entry fees,” he said.

While the government claims the entry fee will keep out low-quality tourists, the feedback from the tourism sector appears to be all negative.

Samphan Panphat, adviser to the Thai Hotels Association, said he disagreed with the 500-baht entry fee because it lacked transparency and would significantly hurt hurt the tourism industry, and added that there are many foreign tourists who come here who do not cause problems.

Sitdiwat Cheevarattanaporn, chairman of the Association of Thai Travel Agents (Atta), also said it was not a good idea and not in line with the government’s plan to promote tourism.

“The plan will affect the tourism industry, both in the short run and the long run, because tourists will feel bad about Thailand and they may feel they are being cheated,” said Mr Sitdiwat.

Authorities should do a better job of screening tourists, enforcing the existing laws and preventing tourists from being conned, she said.