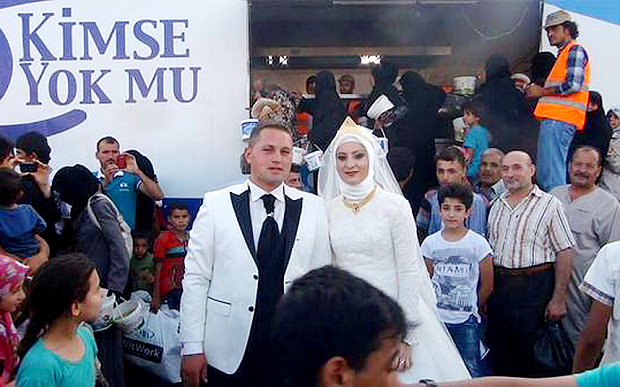 The groom, Fethullah Üzümcüoğlu and the bride, Esra Polat gave out food for the 4,000 Syrian refugees for their wedding reception last Thursday as a culmination for their Turkish wedding.

Turkish wedding are usually celebrated traditionally to last 3 days between Tuesday to Thursday, culminating in a huge banquet on the final night.

The generous idea came from groom’s father, Ali Üzümcüoğlu, who volunteers for a Turkish relief organization called Kimse Yok Mu, to share a piece of wedding happiness with those less fortunate refugees living on the Syrian border, local media reported.

“I thought that sharing a big delicious dinner with our family and friends was unnecessary, knowing that there are so many people in need living next door. So I came up with this idea and shared it with my son. I’m very happy that he accepted it and they started their new happy journey with such a selfless action,” the bride Esra Polat told the local media.

They collaborated with aid organization Kimse Yok Mu and used wedding funds donated by their families to feed people at the camp, Hatice Avci, a spokesperson for aid organisation said.

The bride wore beautiful white gown, with a tiara on her headdress, and the groom wore a white tuxedo with black trim. The bride and groom helped distribute the meals themselves from the food trucks and took their wedding pictures with the refugees, according to reports. The wedding guests banded together to operate the food trucks.

“I’m happy that we had the opportunity to share our wedding meal with the people who are in real need.”, Bride Esra said.

“Best and happiest moment of my life”, Groom Fethullah said.